It’s hard to argue that every man dreams of dating a hot woman. Who in his right mind wouldn’t say no to going out with a dead ringer for Gal Gadot or Jennifer Lawrence?

People say that men are more visual creatures compared to the opposite gender. Guys respond to visual stimulation when they sleep with their partner. Meanwhile, most women need to be emotionally attracted when they engage in it.

But believe it or not, dating beautiful women has its drawbacks.

The Downsides of Dating Beautiful Women

Guys think hot women will cheat on them

Most men love the idea of dating a beautiful woman. But some of them shy away from dating pretty women because they fear they’ll be cheated on. They think that a beautiful woman can be easily swayed to cheat on them.

There’s this perception that because of their looks, beautiful women are easy targets for men. And this goes even for hot women who are in a relationship.

This perception is mirrored by a recent study showing the correlation between beauty and unstable relationships.

One part of the study looked at the hottest actresses on IMDb. The researchers found out that most of the desirable women in Hollywood endured rocky marriages.

This is closely related to the first concern listed above. Men who date hot women find it hard to trust their partners. They always fear that their partners will cheat on them. Worse, they fear that hot women can leave them at any time of the year.

It’s hard to fault guys who think this way. After all, a stunning lady who’s quietly seated at a coffee shop can get the attraction of any guy.

She can be the center of attention without trying at all. And this can lead to unfounded accusations of a hot girl being flirty even if she’s just friends with other guys.

If this sounds absurd, you should consider the studies showing that men don’t trust attractive women.

In 2015, a group of researchers from the University of Connecticut found something interesting. Most men, it turns out, think that hot women are not trustworthy.

This is particularly true for men who are seeing hot women who are years younger than them.

A young, attractive woman who’s dating an older guy is often labeled as a gold digger. And even if that woman has true feelings for her partner, the sad truth is that people will still unfairly judge her as a gold digger.

Gold diggers are often labeled opportunists. They are people, often young women, who enter a relationship with older individuals. In return, they receive cash, designer gifts, and real estate from their partners.

Through the years, we’ve seen many hot women unjustly labeled as gold diggers. The list is quite long. The late former US First Lady Jackie Onassis was 12 years younger than her husband, US President John F. Kennedy.

Whether these women were gold diggers or not isn’t the issue, the list proves that historically, society hasn’t been kind to pretty women who dated older men.

Now, if you like a more mature man and he’s not reciprocating your feelings, then he might think you’re simply after his money.

Hot women are usually the center of attention. They are used to receiving compliments all of the time. They know the feeling of other people staring at them. And they can pretty much get everything they like.

Because of their looks, hot women can easily intimidate even the most confident guy.

A British swimwear model, Jenna Thompson, was once featured on a TV show regarding her love life.

In the said show, she revealed her suspicion that she intimidated single guys. She explained that nice guys felt intimidated by her looks and success. And she felt that the men who were interested in her only wanted to do “it” with her. She thought these guys were not up for a serious commitment.

Most guys think that hot women are like rock stars. They think all attractive women lead happy and healthy lives.

For a normal looking guy, trying to approach and make conversation with a hot woman is like betting in the lottery. The probability of impressing a hot girl is minuscule.

Most guys would rather set their sights on other normal-looking women. They figure they may have a better chance of dating less attractive women than a stunner like you.

Dating hot ladies is even harder for insecure men. These guys may feel less of a man when their girlfriends are pretty enough to grace the cover of a magazine. They will always have this feeling that they are a mismatch to their hot girlfriends.

An academician argues that insecurity can be due to the perception of a large mismatch in the looks department.

Sean Horran, a professor at Texas State University, says that the perception of a mismatch in a relationship leads to insecurities. He cites a study that when a person is in a relationship with a partner of a higher ‘value,’ the said person is likely to be jealous.

One doesn’t need to be an expert to better understand this common scenario.

Partners of hot women feel less confident. They feel that they are not good enough for the love and affection of a stunner. And these negative emotions can wreak havoc on a relationship sooner or later.

In short, it is hard for most guys to date a hot lady. Unless a guy looks like a Chris Evans or is as wealthy as Elon Musk, he’ll likely struggle to maintain a relationship with a pretty girl.

It even gets harder when the guy isn’t as successful. There are just so many issues that can get into play. So don’t be surprised that many guys shy away from dating a hot woman.

Guys may think that you are out of their league, so to speak. It sounds a bit shallow, but it’s true these days.

Yes, they may find you attractive. But deep in their minds, they also think that pursuing you is a waste of time and effort. Thus, they’d rather take the first step in wooing you because they feel they’ll end up shorthanded.

Another possible reason is that they think you’re a snob. Guys may think that you only talk to equally-attractive people. Therefore, a normal-looking dude would not have the guts to approach you, let alone to initiate a conversation.

You may be pretty as a doll, but there are many reasons why guys aren’t asking you out.

Perhaps the biggest reason guys are not asking you out is their false assumption that you’re already in a relationship.

People usually think that attractive women are always committed, which is not a flawed assumption, right? If you’re a good-looking girl, then the chances are high that you’re already seeing someone.

Another explanation is that guys think you’ll only entertain hunks. The reasoning is simple. If you’re a stunner, you would only date a guy who’s also attractive. And if a man who likes you isn’t confident with his looks, then he’ll pass up on the chance to ask you out.

Lastly, guys may think that you already have an army of admirers. Whether it’s true or not, it also signifies that a guy’s chance of dating you is minuscule.

Some men don’t like competing for the same woman. They’d rather set their sights on other women. 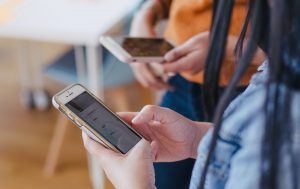 Signs the girl you are messaging isn’t into you!

How To Start A Conversation On Bumble