The Top 10 Benefits of Dating An Older woman

If you’re reading this article, then you’re either interested in dating an older woman or you ended up on this page by accident – (I’m not fooled!)

Anyway, the point is you’re reading this for a reason.

That older woman has caught your eye, and now you have loads of questions floating around your mind, such as:

What will your friends and family say about the age gap?

Is it possible to still be compatible even though she was born in a different decade to you?

The only thing these questions are doing is making you doubt yourself.

Look on the positive side. Just because that woman you like is older than you doesn’t mean she isn’t perfect for you.

Here are the Top 10 Benefits of Dating An Older woman

That older woman has probably learned the hard way what works for her and what doesn’t.

The truth is that things don’t always work out as planned, and when they don’t, well, it can hurt like crazy.

She knows this because she’s lived through this.

Her younger self probably jumped headfirst into making bad choices without as much as a second thought.

Her life experience has taught her what’s good for her and when she should heed caution.

It just means she’s not into wasting her time on things she knows won’t work out, and subsequently, she’s not interested in wasting your time either.

Older women have been there and done it. With maturity comes change and the need for long term security.

Therefore, most older women have their own place and a decent job. They’re fiercely independent and proud of this fact.

Even better, she knows her own mind. Although she’ll value her partner’s opinion, she’ll also be capable of making her own judgment.

Let’s face it, some younger women are at times on the needy side, and for many guys, this quickly gets tiring.

That younger woman is still discovering herself and what makes her tick.

If that girl saw you talking to your attractive neighbor, the likelihood is she wouldn’t be overly happy about it.

An older woman is far more likely to be secure enough in herself not to flip out just because you spoke to a pretty girl.

It may sound like a simple thing, but the endless nagging and jealous streak from younger women build up over time and cause many breakups.

4. She knows what she wants

What she really, really wants…

Because with age brings knowledge.

If she believes that you’re right for her, then it might be worth trusting her judgment.

The truth is that we learn what we don’t want by experiencing it firsthand. So when she shows interest in you, then take it as a compliment. It’s evident that you possess traits that she finds endearing.

She doesn’t feel the need to wear a micro mini skirt and spend an hour straightening her hair.

She’s accepting of herself, and she’s not trying to work out her style, image, or who she really wants to be.

There’s nothing wrong with younger women trying to discover themselves, but it’s not always fun dating someone like this.

Older women don’t dress to make an impression on other people; instead, they dress for themselves.

Okay, so she might still have a bad hair day and stress out about what she should wear to the office party.

Occasional image freak-outs happen to us all.

While the inability to find the right outfit might affect a younger woman’s entire day, that older woman is likely to shake her worries away, learn from them, and move forward.

Older women are comfortable enough in their own skin to know what they want and are mature enough to not let superficial insecurities hold them back.

No, this doesn’t mean all older women are members of Mensa.

For many, intelligence comes from experience, and this comes from living and learning along the way.

There’s no doubting that intelligence is sexy!

Chances are you won’t have to explain ‘that thing’ to her over and over again.

She’s also fully capable of holding down a conversation with anyone and everyone. She’s probably not going to be as judgmental either.

She’s lived and learned, so she doesn’t feel the need to put those younger than her down or belittle them.

When it comes to game-playing, then older women are so over it!

They don’t have time for childish games, and they definitely aren’t after a man who does.

They don’t have the patience to be second best to some other woman or to be messed about in any way.

If you’re uncertain about what you want and who you want, then the chances are that an older woman isn’t going to wait around for you to figure it out.

She’s been there, done that, and isn’t up for doing it again. She knows that solid relationships come from trust, honesty, and loyalty.

She might be into younger men, but this doesn’t mean she’s willing to put up with silly mind games.

Most older women are after love and to find a soul mate to spend their life with. Mature women definitely don’t have the time or patience to participate in mind games.

When it comes to all things sexual, then that older woman knows what she wants.

While being younger brings with it the need for sexual discovery, with age comes the desire to enjoy sex and have fun.

When it involves the bedroom, then that older woman will tell you what she likes, and let’s face it, she’s likely to teach you a thing or two.

She knows that the best sex comes from communication and not being afraid to tell you what she likes.

A mistake common among a lot of younger women (and guys too) is they let other people walk all over them.

Whether it be friends, family, or work colleagues, younger people often feel like they have to do stuff they don’t want to do just to impress others.

If that older woman doesn’t want to work overtime at the weekend, then she’ll tell her boss this.

She’s done making herself unhappy to please others.

Yep, her doormat days are over.

Let’s face it. Life’s far too short to waste it, carrying out actions with little benefit.

Yep, she’s loves living and can’t wait to find someone to spends many happy years with.

She loves the thrill of a new relationship as much as she enjoys getting to know her partner and moving forward with their life together.

Older women don’t worry about the little things so much. Instead, they love life and want to live it to their fullest.

When dating an older woman, you know that they will say it how it is.

Age gap or not, older women have a tendency to see the bigger picture. And if they think you two could go somewhere, then they’ll want you to be aware of this.

As I said before, older women are well past the game playing stage.

Do you still have one or two questions buzzing around your head?

No worries – just read on to find out the short answers to the most asked questions regarding what you can benefit from while dating an older woman.

When it involves dating, you could follow the rule of seven if you wanted to. This involves dividing your age in half, then adding seven.

Okay, so if you’re a 20-year-old-guy, then dating a 50-year-old woman is going to raise eyebrows.

But if she makes you happy, then stuff the rule of seven rule and be with whoever you choose to be with.

2. What is the attraction of an older woman?

Basically, when it comes to dating older women, then they know what they’re looking for.

And trust me, a woman who knows what she wants is seriously sexy!

3. Does age matter in a relationship when the woman is older?

Ignore the society! If you like her and she likes you, then why does it matter what anyone else thinks?

Trust me. Life’s far too short to miss out on someone you like just because you’re worried about what others will think of you.

Yes, a 10 year age gap is likely to bring challenges.

She might take longer to go on a date night while you’re eager to go out partying with your friends.

The truth is that all relationships have challenges. So, if dating an older woman makes you happy, then do it.

And for goodness sake, stop worrying about what other people will think about it.

It pays to remember that It’s your life, not theirs!

Dating and Flowers: Tips for Success 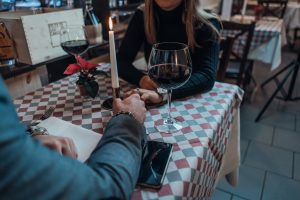 The Benefits of Dating Someone Older Than You