The dating game can be rough at the best of times. If you’re an outlier, it can get brutal.

Everybody wants to be a little better than average when it comes to their date. If you’re short or tall, things can get pretty disheartening.

When it comes to dating tall girls, you step into a minefield of expectations, do’s, don’ts, disadvantages, and advantages.

Play your cards right, and dating a tall girl can be one of the world’s best things.

Reasons Why You Should Date a Tall Girl

Dating a tall girl is awesome. Sure, they can pass you the cookies off the top shelf, and they’ll wrap you up in an awesome bear hug, but it’s deeper than that. If you open up all the doors in your dating game, there’s no end to the possibilities.

A lot of people think they know what they want when it comes to partners.

People’s first impressions are often right, though they’re often also wrong. If you tell yourself you don’t date tall girls, you’re cutting yourself off from a deep well of opportunity.

Instead of worrying so much about tall, short, thin, or wide she is, zero in on a girl’s personality and work from there.

If you like her sense of humor, share her interests, and have plenty to talk about, it will be a lot easier to date her. If you like her height but nothing else, the relationship is heading for rocks.

One of the best things about dating taller women is that it’s often one of their key features.

Tall people, especially tall women, are told they’re tall a lot. With society reinforcing something about you so often, it’s easy for it to shape your personality.

Not only does height help build up a person’s personality, but more often than not, it helps develop a good sense of humor.

Being tall is generally funny for some reason. Kids get bullied for it, and lots of tall kids either go quiet or get a good sense of humor as they battle their way through school.

Taller women are no exception, and they often have killer senses of humor. Not only that, but plenty of tall girls are into sports. Being tall helps give you a natural ability when it comes to many sports, so if a girl’s grown up tall, there’s a good chance she plays sports.

Being tall can be challenging, especially for women. But it can also fuel confidence. What’s hotter than a taller woman with a good sense of humor and a killer personality?

There’s a reason why so many actresses and models are up near six feet tall. Don’t short change yourself and start dating a taller girl.

Do’s and Don’ts of Dating a Tall Girl

Is there something about you that people always mention? Maybe you’ve got curly hair, or you look like Matt Damon, it doesn’t matter. But every time you talk to a stranger, they mention it. It gets to the point you can predict what they’ll say.

Well, this is how life is for a tall woman. People probably tell her every single day that, wow, she’s tall!

Now, think for a second about what she wants on a date. She wants to laugh, have a good time, and forget her worries for a few hours while getting to know someone new.

One of the best ways to make her feel self-conscious immediately is by saying, wow, you’re tall, as soon as you meet her.

Take it in your stride, even if it does come as a surprise. She’ll be impressed by someone saying something new for a change, and that’s what you’re looking for – a chance to stand out from the crowd.

So, the first rule of dating tall girls is don’t talk about her height the whole time. It’s your job to make her forget the bad things and focus only on the good.

Make her feel unique and beautiful. It doesn’t matter how she compares to other women; it’s how she comes across to you.

Saying that, don’t pretend like she isn’t taller than you. Ignoring the elephant in the room even when it comes up in conversation is a great way to make both of you feel awkward.

If the topic comes up, deal with it naturally. Ask her what it’s like to date shorter men and see where things go from there.

A great way to ruin a date with a tall woman is by making her stoop. Even if she is much taller than you, speak up and look her in the eye. If she has a sore neck from trying to listen to you all evening, she’s probably not going to call you back.

Even if you can’t make yourself physically taller, you can have a larger presence. So stand up straight and talk loud enough for her to hear.

Try to make them feel special by noticing their personality, stories, fashion, and demeanor. Paying a special and specific compliment is never a bad idea.

Forget about height and go for laughs. If you can get a girl to laugh, then you’re in with a chance. Bringing a set of jokes already prepared is a recipe for disaster. Try to be off the cuff. If it’s going well, gently making fun of her is a great way to flirt.

If you think it’s a good idea, crack a joke about her height. While joking about a potentially sensitive topic might be risky, if it doesn’t go well, laugh it off and move on.

Taller women are no different from tall men, short men, shorter women, or anyone else. If you make her feel good about who she is, then it’ll be a good date.

Advantages and Disadvantages of Dating A Tall Girl

Dating a taller woman can be a blast. First of all, there’s a good chance she has plenty of character, a good sense of humor, and is an all-around awesome person.

Secondly, you get to be a little spoon! Imagine how awesome it would feel to be wrapped up by her lovely long limbs.

There are a lot of stupid misconceptions about dating taller women and shorter men. Like nearly all misconceptions, they’re untrue.

Short and tall people are the same as everyone else. Sure, their physical attributes might flavor their personality and personal story, but it doesn’t define who they are.

While someone might have crafted their hobbies or sense of humor around being tall, it doesn’t make them who they are. It also doesn’t mean they’re like every other tall girl out there. Everyone is unique.

If you treat your date like that and actually listen to what she says, you’ll have a much better chance of finding love, regardless of size.

So, if you find yourself on a date with a taller girl, give her a break. Be extra generous with your compliments.

Try to bring your A-game to the table and make her feel like the queen she is. Never let a little thing like height get in the way. If it does turn out to be true love, you’ll see eye to eye.

Even Tom Cruise has had a killer career and dated many beautiful tall women. So, it doesn’t matter how tall you are. While it might sound corny to say, but it’s who’s inside that counts.

People like nice people with good personalities and great senses of humor. They quickly forget if that person was taller or shorter than them.

If you’re way taller or way shorter than most people, then life can turn into a constant reminder of how different you are. Economy seats on planes, backseats in cars, and low-ceilinged houses become a constant nightmare for taller people.

It’s also a nightmare being constantly reminded by friends, family, and strangers how tall you are. The world has a good way of never letting you forget the one thing you really want to.

Even if you stoop, crouched over with a bent spine, and wear flats every day, people will still say, wow, you’re tall!

So, yes, in some very real ways, height does matter. But then you have to ask yourself if height matters to you? Are you the type of person to the right of another human being because they look some way or other?

Height is something people can’t control. If you’ve never dated a tall woman, give it a go. If you don’t fall in love, that’s okay. Try and try again.

Dating and finding that someone special is something of a numbers game. You increase your chances of finding the right one if you meet plenty of women.

Instead of saying I only date girls shorter than me, try to think every date is an individual looking for love like you.

If you let height or weight, or any other physical attribute stand in your path to love, the dating game is going to be a lot harder. Instead of focusing on what you don’t want, try to figure out what you do want. While height might be important in photos, falling in love with someone is much more to do with personality.

Get to know her. If your personality clicks and your heights are uneven, don’t worry about it. If she’s learned to live with the fact she’s taller than most other women, then you can too.

When it comes to dating tall women, it can seem like a minefield. If you’re unsure what to say/not say or do/not do on a date with a taller girl, check out these FAQs and think about what you would do.

2. Does it matter if I’m shorter than my girlfriend?

No. If it matters to you, have a talk about it. She knows more about being tall than you do, so ask her what she thinks.

3. Are girls always shorter than their boyfriends?

No. While it’s more common for girls to be the shorter of the two partners, it’s by no means exclusive.

This stereotype has been reinforced over the years of movies and TV. In real life, though, it’s not quite so simple. Some women like tall men while others like short guys.

Most, if not all women, like guys with good personalities.

Five-foot nine inches is the average height for men in the USA. If you’re under that, you’re shorter than average.

Anything under Five-foot five is regarded as short for a man in America.

6. Why are men taller than women?

On average, men are about 7% taller than women. This height difference is caused by differences in our biological makeup and hormone levels, as well as having growth spurts at different stages of puberty.

Yes and no. Tall women are individuals with their own likes, dislikes, and desires. Knock them out with your stunning personality and stop worrying about her height. 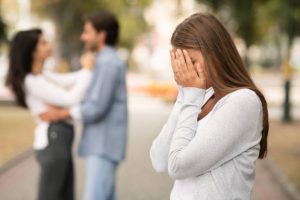